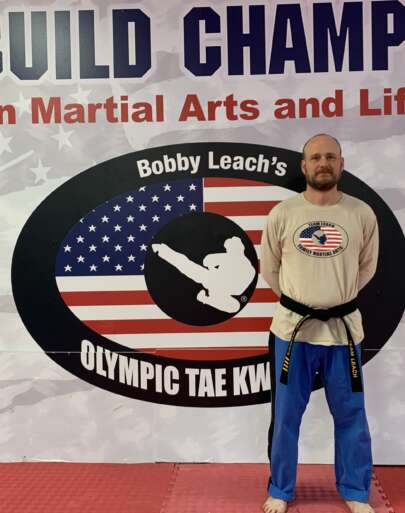 Michael Teasdale began training in martial arts in 1988 in the arts of Tang Soo Do, Hapkido, and Tae Kwon Do. He holds a fourth dan black belt. Michael has a passion for the history and development of the martial arts and endeavors to pass on these traditions to his students. From 1994 to present, Michael has been teaching martial arts, and self-defense incorporating traditional training with real world practical application. It is Michael’s firm belief that training and development in martial arts is much more than a hobby or a sport. The study of martial arts is a way of life that increases focus, confidence, self-worth, and both physical/mental health.

Michael joined Team Leach in 2017 when his son, Henry began training. His younger son, Cole will be kicking along with his brother and father as soon as he is old enough. Michael loves being able to pass on his passion for the martial arts to his children. The family that kicks together sticks together!

Outside of his passion for training and teaching, Michael is a Registered Nurse who tries to provide care to underserved communities. That is why he chose correctional nursing as his specialty. Over his 11 year career as a corrections nurse Michael has developed programming for juvenile facilities in health education, and has presented on state and national levels to fight addiction.