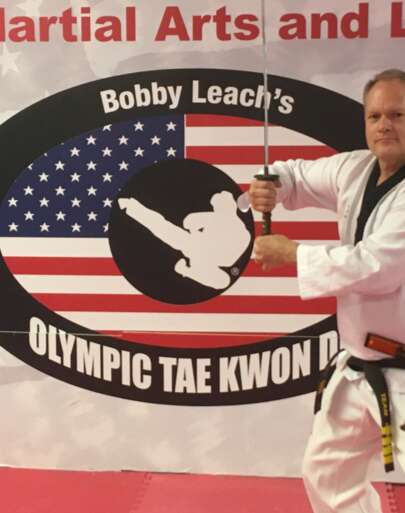 Master Eric Schenke is Kukkiwon Tae Kwon Do certified and holds a 5th Dan.  Master Schenke started his martial arts training in 1976 under Master J A Kim in Sea Girt, NJ learning Isshin Ryu.  He continued his training in 1985 learning Go Jo Ryu under Ric Pascetta. Upon moving to Sicklerville, NJ Master Schenke and his son, Eric began training under Master Norman Holmes learning both Tae Kwon Do and Hap Ki Do.  During this time Master Schenke and his son,  also trained with Grand Master Kum Sung in Toms River,  NJ learning the Korean sword. In 2016 they were both certified on the Korean sword and attained the rank of 3rd Dan. Upon Master Holmes’ passing,  Master Schenke and his son joined Team Leach in 2013, where they both have attained the rank of 5th Dan. During his time at Team Leach, both he and his son were certified by Master A.D Lingo in the Japanese Samurai sword in 2016.